Gregor and the Curse of the Warmbloods, by Suzanne Collins — August 18, 2017

Gregor and the Curse of the Warmbloods, by Suzanne Collins 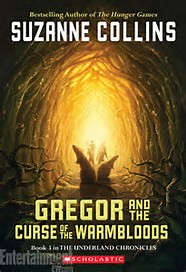 Gregor is back to leading a normal life now, mostly. But then it all changes. Apparently, the Prophecy of Blood is upon the Under landers. The Prophecy of Blood is a plague that no one knows the cure for. Gregor has to go down there for a meeting, or else. Gregor goes to the meeting and his mom gets the plague. So Gregor decides to go on an another quest. This time to find the plague cure. Gregor meets many new friends and makes some new enemies. The quest leads through a jungle to the Vineyard of Eyes. The Vineyard of Eyes, that sounds really creepy to me. Like, really creepy. In this Vineyard of Eyes there is this plant called Starshade. Gregor and his friends think that this is the only cure for plague. So Gregor and his friends set out to find this plant. But will they all make it out alive?

Gregor and the Curse of the Warmbloods is okay. I am not sure about this book. If I was Book Princess I would give this book an Elsa rating. But I think that I need to be me and not copy Book Princess. I do think that I enjoyed this book that much. Three Stars. Thanks for Reading!!!! Have a Great Day!!!! -annaleeliz and Buttons