The Game of Sunken Places, by M. T. Anderson 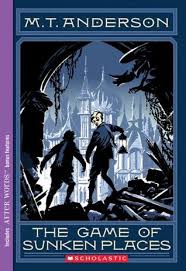 “When Brian and Gregory receive an invitation to a distant relative’s strange mansion…well, they should know better than to go. Trips to distant relatives’ strange mansions rarely go well. And this mansion is even stranger than most. Uncle Max doesn’t really know what century he’s in. The butler burns socks. And the attic is home to the Game of Sunken Places.

The Game of Sunken Places looks like a board game. And most of the time it acts like a board game. But from the moment Brian and Gregory start playing, they are caught up in an adventure that goes far beyond the board. Soon the boys are dealing with trolls with bad attitudes, warring kingdoms, and some very starchy britches. There’s a surprise around every corner-and, for Brian and Gregory, only one way to win.”  Taken from the back of The Game of Sunken Places

The Game of Sunken Places has a couple of twists in it. The genre is fantasy/steampunk, which is a very interesting genre combination. This book could have been a lot better. It was not suspenseful enough and everyone was very sad at least once in the book. I like happy stories.  If you love fantasy or steampunk this is a book for you. I believe that this book could have been a lot better but it was still pretty good. I thought that the setting changed a bit to much. Like you were here and then a paragraph later you were somewhere else. Those were my only problems with the book. Three Stars. Thanks for Reading!!! Have a Great Day!!! -annaleeliz and Buttons